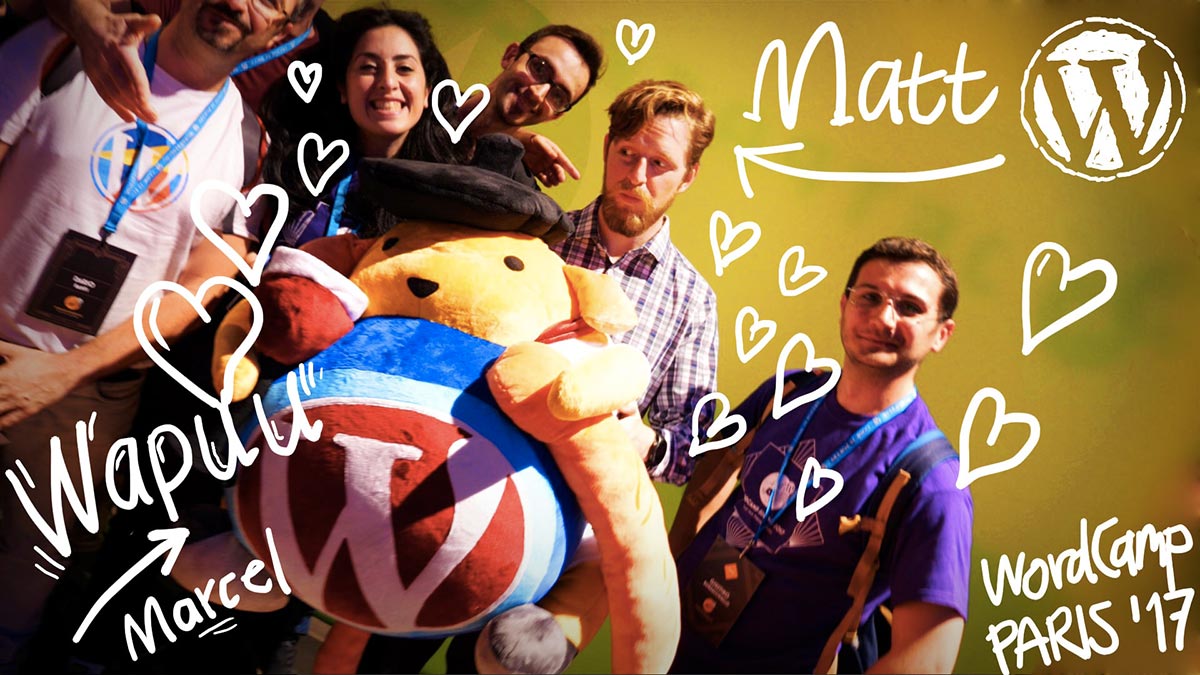 Wapuu joined us as usual at the beach, for a drink in Spain. Since last year’s Vienna WordCamp Europe he had been looking forward meeting you all again. And it was a lot of fun.

Check out the video from Paris!

All that love, packed in 2 minutes of just smiles. Get a ton of positive energy for your day.

We were drinking, and Wapuu once said that he wanted to make the WCEU 2017 a very special occasion: “In the city of LOVE I want to be like the locals!” And continued: “I want to enjoy life drinking wine, eating baguette with camembert and sit below the Eiffel Tower having fun with friends.”

Wapuu wanted to take more Polaroids than ever, so all our friends can take a little souvenir back home. But one of the things Wapuu was most excited about was to meet his friend Julio Potier, founder of SecuPress and part of WP Rocket and Imagify, who gave him the wine and baguette and gave him a nice name Marcel.

My kid! My Marcel! Come to papa!!! #getwapuu #WCEU pic.twitter.com/6dvULg8AGs

Show us where the Polaroids are now!

We hope you also have a Polaroid picture at hand. And we’d like to see where it is now 🙂 Let’s share your Wapuu picture with us via Twitter and Facebook using #whereiswapuunow hashtag. Send us your photos with Wapuu at your home or your favourite location such as: The Eiffel Tower? The Big Ben? Your home’s deck? By the pool? Join Wapuu and show us where you guys hang around!

We’re all looking forward meeting you again next year in Belgrade at WordCamp Europe 2018. And again, we are happy that our Serbian friends won the French Wapuu with an amazing social media hurricane involving the whole Serbian WP community. It was unbelievable – more than 300 Twitter retweets and likes on Instagram. Wow!

Only one more dance at the #WCEU #afterparty before I leave to #Belgrad for the next #WCEU #wapuu #getwapuu – see you all there! pic.twitter.com/w4MM8EpK4Y

See you all in Belgrade, Serbia for WordCamp Europe 2018!